An exact copy of the venerated icon of Andrew the First-Called, with a piece of relics of the Saint and the crucifix, were brought from the Greek town of Patras to Moscow. On December 13 — on the Day of the Saint — the icon will be displayed at the State Kremlin Palace, informs Rossiyskaya Gazeta.

«It‘s the icon painted in Byzantinesque style. It was meticulously created by nuns of Saint Nicholas Convent. The icon was being created for a prolonged period of time (about a year — editor’s note). And the nuns used a magnifying glass for certain details. It has pieces of the relics and the cross incorporated. This is the unique work. I am sure it will become the revelation for many people,» said Vladimir Bushuyev, Director of the Foundation of Saint Andrew the First-Called, in an interview to the Russian News. Vladimir Bushuyev was in charge of the pilgrim group in Patras who came from Russia and Ukraine.

The event is significant for the Orthodox family of peoples and reminds Russians and Ukrainians about their common grounds. It is here in Patras where Andrew the First-Called was crucified on the X-shaped cross. Andrew the First-Called is the patron saint of Kiev. Monuments to the Saint can be found in Valaam, Crimea, Moscow and Zaporozhe.

«According to a legend, Saint Andrew the First-Called came ashore in Crimea and went along the lands of the country which later was called Rus, and via Kiev he reached Valaam», told Vladimir Bushuyev. 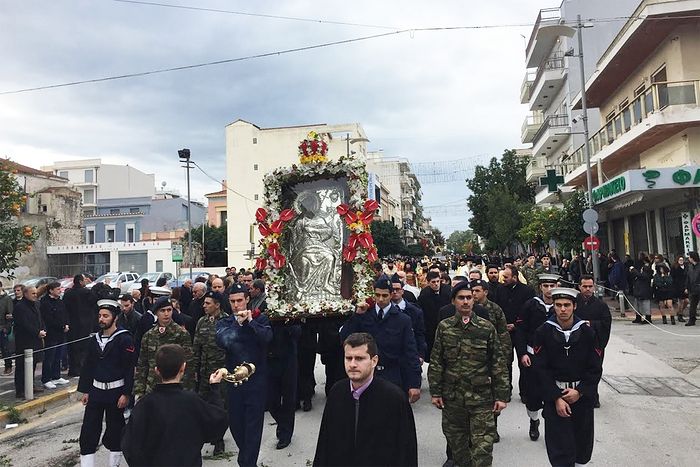 14:42
“Personalities of the Russian Community Abroad. 1920-1945”
10:56
Putin proposed an amendment about traditional family
18:35
The Foundation got the blessing to deliver the Holy Fire to Russia
10:48
A meeting of the Board and the Board of Trustees of the Foundation of Saint Andrew the First-Called took place
18:54
Winners of “Faith and Fidelity” Prize 2019
13:35
Heads of the states sent welcome words to address the Forum participants in Belgrade
All news to date
All news program: Translation of orthodox relics